Who has the most followers on Instagram: top 15 for 2021 + how to get popular if you’re not a star 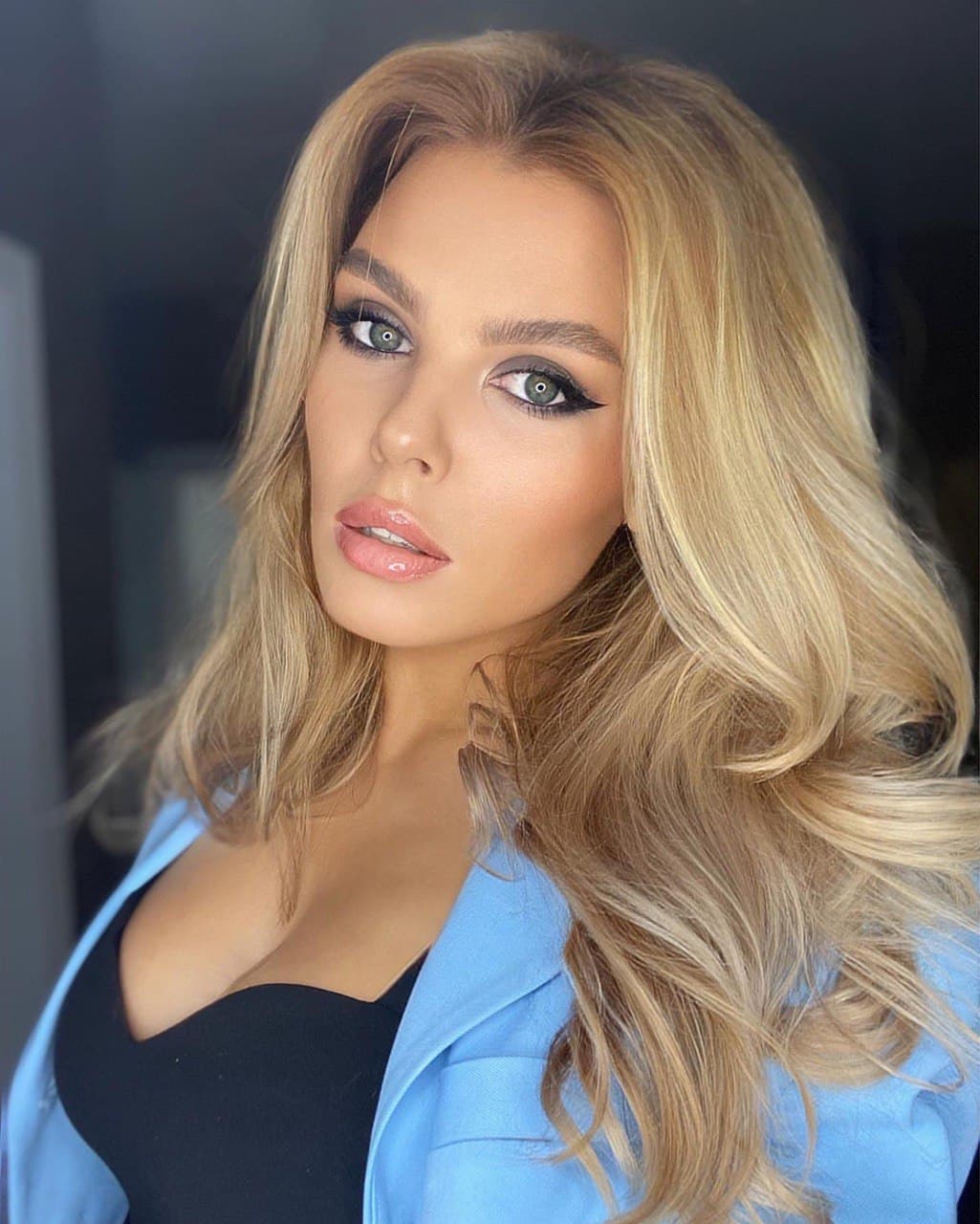 Violet Rich
If we evaluate the social platform as a cut of the cultural needs of mankind, then it is obvious that today we are interested in music, glamour, football and gossips! Here is a list of most-followed accounts for 2022

The young, but already incredibly famous, representative of the Brazilian football school is sincerely in love with his favorite sport. And also with large fees and himself – collecting awards, receiving impressive fees from participation in advertising and constant posturing go hand in hand in the life of Neymar da Silva.

She dedicated her J.Lo account to her beloved – her work. This is performances on stage, acting, the preparation of new hits, and business activities.

Starting with the second album, which immediately reaped the harvest of 4 Grammys, the singer has firmly occupied the podium in pop music. According to Forbes, she became the second highest paid female performer.

In this account, a person acts only as a cautious observer of wildlife, and shots of original life in distant corners of the world. All of them are of excellent quality, as opposed to the attempts of tourists with smartphones – a huge number of Instagram users can confirm this. 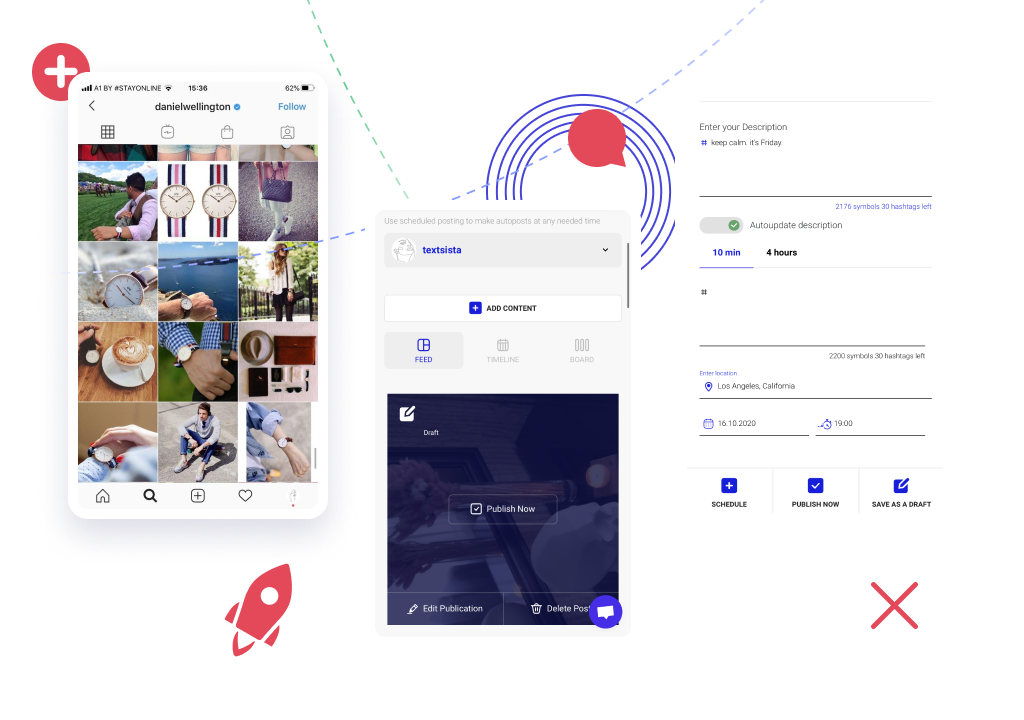 Post as a pro
Do you often forget to post on Instagram, and that is why your follower growth is too slow? Automate your posting once and forever
Try posting

The youngest offspring 20-year-old Kendall has already managed to take part in the filming of a TV series, became the heroine of scandals in the modeling business, made useful contacts, and is confidently making her way to the big podium. Almost documentary evidence of this multifaceted process can be seen in the form of posts on her account.

In first place in terms of the growth of subscribers is the official Instagram account, in second, the football player Cristiano Ronaldo, in third, the model and participant in the TV show "The Kardashian Family", Kylie Jenner.

The growth was distributed as follows:

The highest percentage of the bloggers on this list are musicians: 35% of them. 20% are associated with the Kardashian Family show, 15% are TikTokers, 15% are athletes, 10% are brands, 5% are actors. Only one actor made it into the top 20 – Dwayne Scala Johnson. Most of them, by the way, entered Instagram giveaways as a strong method to build a following on social media.

If we talk about geography, then most of the top fast-growing bloggers are from the United States – 85% – the rest from Spain, India and Portugal (5% for each country). TrendHERO notes that such statistics are due to the fact that Instagram in the United States is better developed than in other countries. There are nearly 18 millionaire bloggers in the United States, according to the service.

Scandalous for his teenage antics amid the intoxication of early fame, the Canadian R&B singer remains popular in certain circles. On his account – many copies of albums sold, a number of awards, filming and participation in the show.

The legendary personality of the world of show business at the beginning of the 21st century is one of the hundred most influential representatives of the music industry. Beyoncé's albums are sold in tens of millions of copies and there is no free space on her awards wall – which is the status of only the most nominated singer in the history of the Grammy Awards.

Not so much a TV star, socialite and businesswoman, but a legend of modern times, an idol for numerous fans and connoisseurs of glamor. Her image allows you to generate megatons of visual content that is used for a variety of purposes, and each new publication invariably causes a stir. It is no longer so important what will be shown next time – almost 90 million subscribers are happy with any news.

Selena Gomez is a singer, actress, composer and songwriter, model and UNICEF Goodwill Ambassador. Her career began in 2002 and was very eventful, shooting numerous films alternated with album recordings and concerts.

Mr. Johnson has made a name for himself in the wrestling ring, having won a huge number of awards and amassed an impressive list of achievements.

Grande has successfully recorded several commercially popular albums, takes part in the voicing of cartoons, and starred in serials and television shows. Her image is at the formation stage, and account followers take an active part in it.

The owner of a truly countless number of sporting achievements, a permanent inhabitant at the top of football ratings, and a constant contender for the title of the best football player of all time for several years in a row. Messi uses his social media account to post photos with friends and family and in different life situations.

How to get Instagram followers in 2022 if you’re not a world-famous star?

Just turn on the Instagram followers bot, and you’ll get all these possibilities at once:

First of all, we start from the “age” of the account. It is considered from the moment of the beginning of the active continuous activity, and not from the date of registration. Moreover, if you regularly made stories and publications, and then for some reason stopped for 2 weeks or more, all the previous accumulated “age” is canceled – you will have to start over.

If the account is less than 0–2 months old, automatic mass following is prohibited. You need to manually recruit a base of 100 live and engaged subscribers. But before that, the profile should have at least 20–30 publications.

If the account is 2–6 months old, proceed as follows: smoothly reach 250 followers and connect the automatic bot to boost manual mass following. Do not forget to naturally be active in user profiles – like, watch stories, comment. To improve statistics, unsubscribe from bots and those who did not reciprocate. Do not forget that unfollows are also taken into account in the total limit, and there must be a gap between actions.

If your account is more than 6 months old, you can completely switch to an automatic mass following on Instagram. Leave helpful and friendly comments under thematic posts. 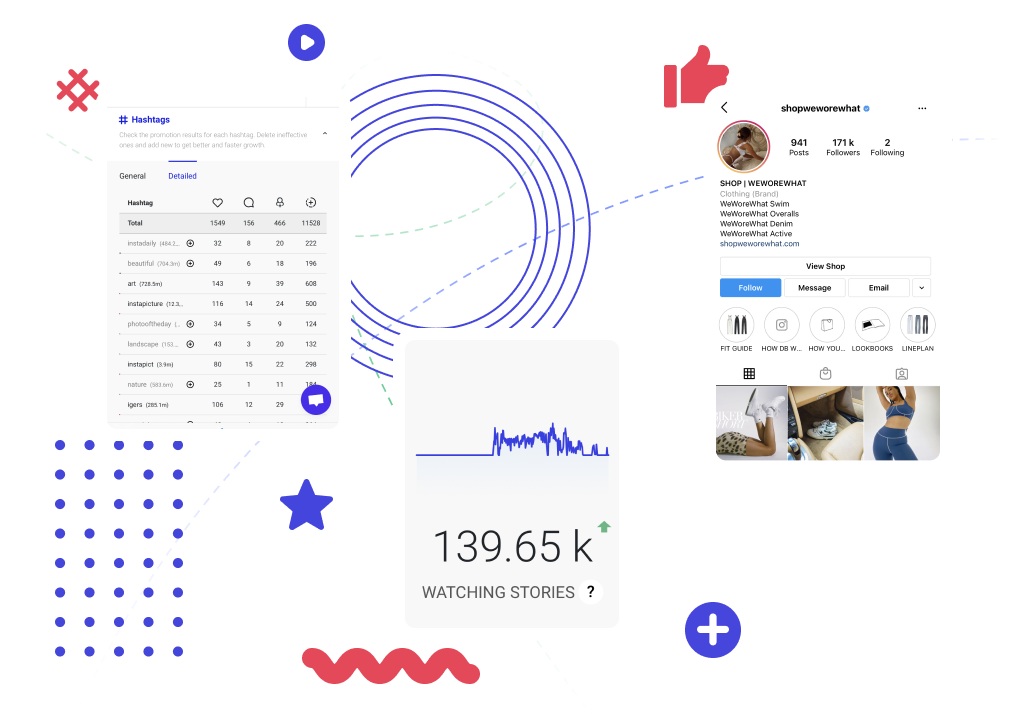 Switch on popularity
Boost your followers number in a few months, and then you’ll get in the list of most popular Instagram accounts
Try promo

Designer outfits, jewelry, photos from the dressing room and in the company of famous people – it is unlikely that millions of subscribers to the young model's account expected something else. Kylie, being younger than her sister Kendall, has already significantly surpassed her in the number of followers!

The footballer whose name is associated with the greatest costs in the history of football – in 2009 the Spanish team Real Madrid paid 80 million pounds sterling to move Ronaldo from England's Manchester United. Cristiano Ronaldo does not complain about the lack of attention, and therefore his Instagram account is equally filled with pictures from the football field and in the bosom of his family.

To explain what the service itself is known for is very simple – the largest platform for publishing author's photographs in the world. And it's even easier to describe the contents of its central account – they post everything.

Instagram consistently holds the title of one of the most popular social networks. People go to Instagram to follow the lives of celebrities and look at photos, and those who publish them earn crazy money from advertising. And you can become an Instagram influencer too if you have something interesting to give or show to your audience. The main indicator of success here is the number of followers, which for top accounts is in the hundreds of millions.

Article
5 Ways to Gain Followers With NEW Instagram Features
How to outsmart the tricky Instagram algorithm in 2022? Embrace a power of new Instagram features and incorporate 5 innovative tips on Instagram promotion to your social media marketing strategy.

Article
Build Your Business on Instagram! Get 25,000 Followers Just In A Couple Of Months!
While you are looking for an answer to the question on how to get most likes on an Instagram post, we are actively helping people to reach this goal. Hope, this real case study will inspire you as well.

Trusted
We are already trusted by more than 15 000 clients. Check our social networks to see the feedback from them!
FINALLY INTERESTED? Start NOW
Welcome back!
Use your credentials to Sign In
or connect with