How to Use Food Hashtags To Boost 50% More Traffic To Your Page In 3 Months!

Maria S.
Jill Fergus has created a food blog on Instagram and in 3 months has increased the number of followers by 21.5K people!

Do you want to achieve all your goals and fulfill the dream about Instagram promotion as fast as possible? Our Inflact team did everything possible for that! Now, you can use hashtag generator and select only trending hashtags!

Read the case-story of a food blogger who has used hashtags generator for 3 months and got fast promotion, increased the number of followers and got real feedback from the audience!

Do you know that using trending hashtags you can become popular on Instagram? Read Hashtag: Simple way to great promotion!

P.S.: So prepare some goodies-foodies and let's start!

Use Food Hashtags Instagram And Boost 50% MoreTraffic To Your Blog!

Unfortunately, to select correct food hashtags Instagram is a quite tricky task that requires detailed analysis and consideration. Many people take a drubbing choosing the wrong ones for their promotion. Such a failure has happened to Jill Fergus. Jill is a cook. One day, she has decided to start her blog and began to work on her promotion in this social network.

Today, she has 71.5K followers and 1800 publications. These are not only beautiful pictures of healthy and delicious dishes but also recipes and tips for cooking them. On average, there are about 5000 thousand likes and nearly 1000 comments under her posts.

It is her results now. But 3 months ago, when she has put the wrong hashtags, she had about 50K followers, 1678 posts, 1K likes and 200 comments under publications. How did she achieve such results? She has started to use hashtag generator and put only working and trending hashtags!

Hashstory: Specified the goals and strategy

Jill has decided not to make the previous mistake and do everything possible for using only the reliable hashtags. For that, she has asked Inflact team to help her. Our girls have given her the right action plan.

First of all, it was necessary to specify the goals. So, Jill has pointed out the following purposes:

Secondly, it was necessary to choose the right strategy. In this case, Jill has chosen to use the hashtag generator that can pick up for her posts the most trending and working hashtags.

Thirdly, the girls have corrected her previous mistake: Jill has used only frequent hashtags without average and rare. But, for the successful result, it is necessary to put specified hashtags, like niche, related and unique under the posts.

Finally, Jill has put up to 20 hashtags. It was wrong because such a number of hashtags irritates users and does not always work for the result.

From this time, each of the posts includes no more than 10 hashtags. This number is the most suitable for placing hashtags under one publication. 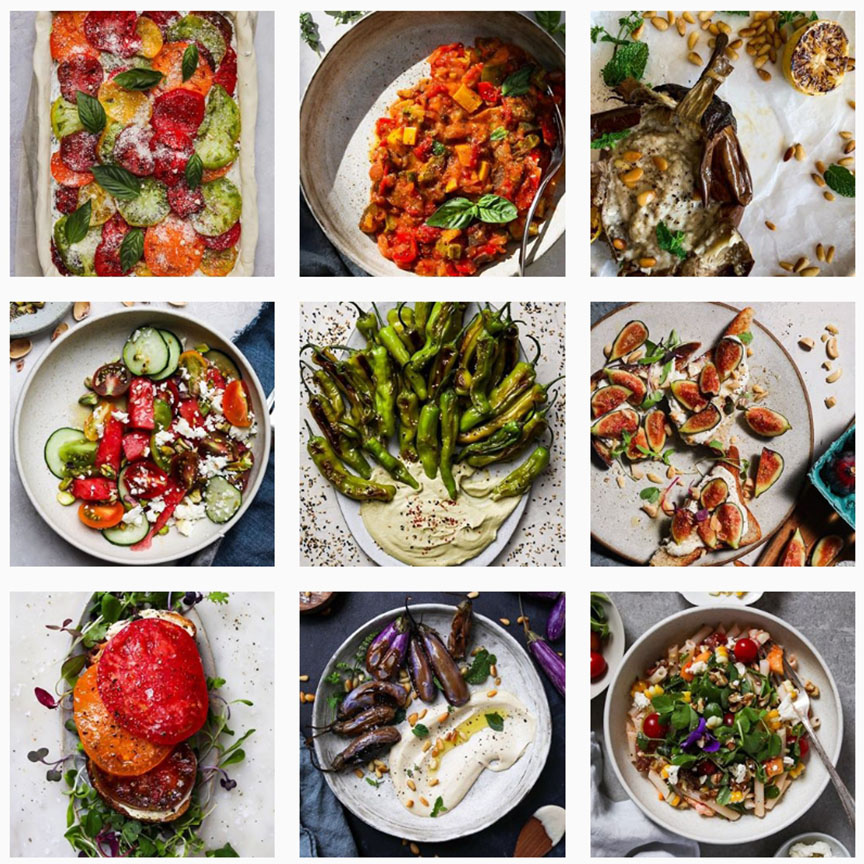 After that, Jill has started to divide all used hashtags into 4 categories: popular, niche, similar, unique. She has tried to use in one post 2 hashtags from each category based on the following scheme:

Popular hashtags. Jill has put hashtags like #food #foodie #foodporn. Indeed, they are quite popular and have a high coverage rate of publications on Instagram. They make about 50% of the audience traffic. 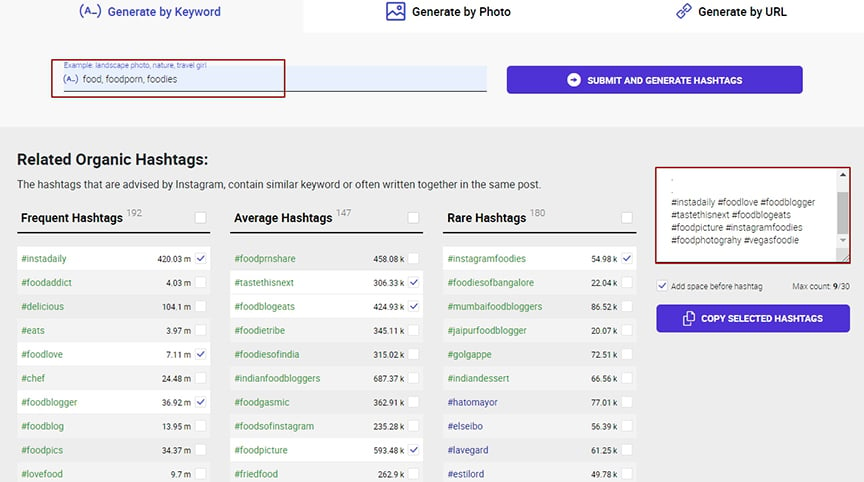 Niche hashtags. Jill has tagged her posts with hashtags such as #foodblog #tastyblog #bestofvegan #recipe. They perfectly displayed the topic specification and publications and helped to feed better. Such hashtags help her to increase the prepositions about cooperation in 3 times. 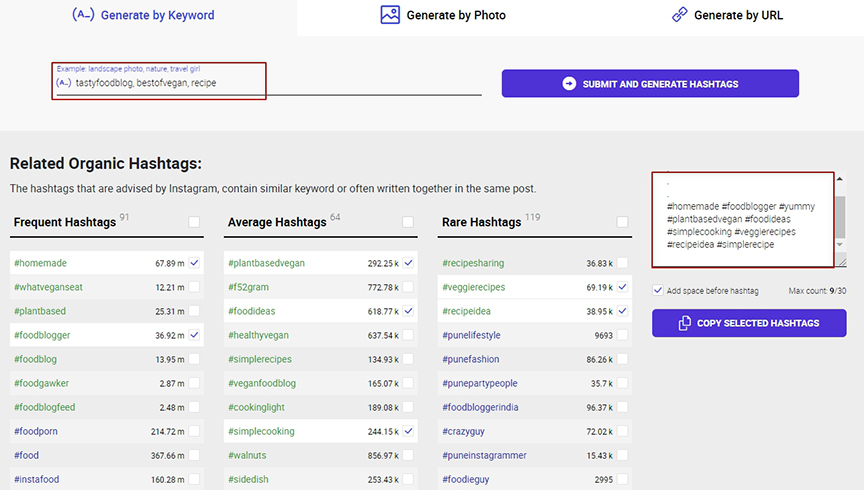 Related hashtags. Jill has used hashtags such as #healthyfood, #foodart, #eattheworld. She likes to cook healthy food, so she has decided to put healthy food hashtags. They helped her to increase the engagement rate by 13%. Also, such hashtags have added 10% of traffic to her page. 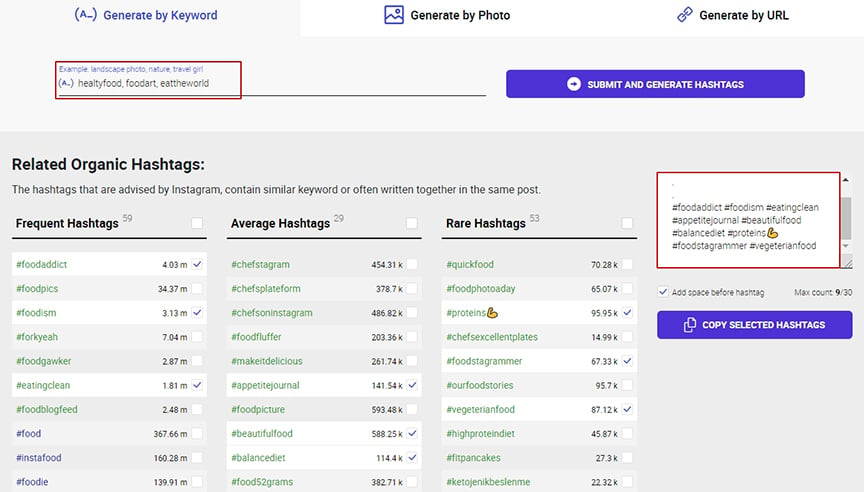 Unique hashtags. This category of hashtags includes person specified tags that he comes up with. They should be the brand of the profile! So, Jill has coined two slogans - #howiholiday and #feedfeed. The first one reflects the main idea of her blog: everyday cooking as a holiday. The second one is the name of her website. Through this process, she has started to promote not only her blog but also her brand.

Besides, when she has determined each new hashtag, she has made the complete analysis of its using. First of all, she pays attention to hashtag difficulty. If it was more than 50% - she hasn’t used it. Also, she sees the average number of posts per day that uses this hashtag. These statistics help her to predict the future success or failure of chosen the hashtag. 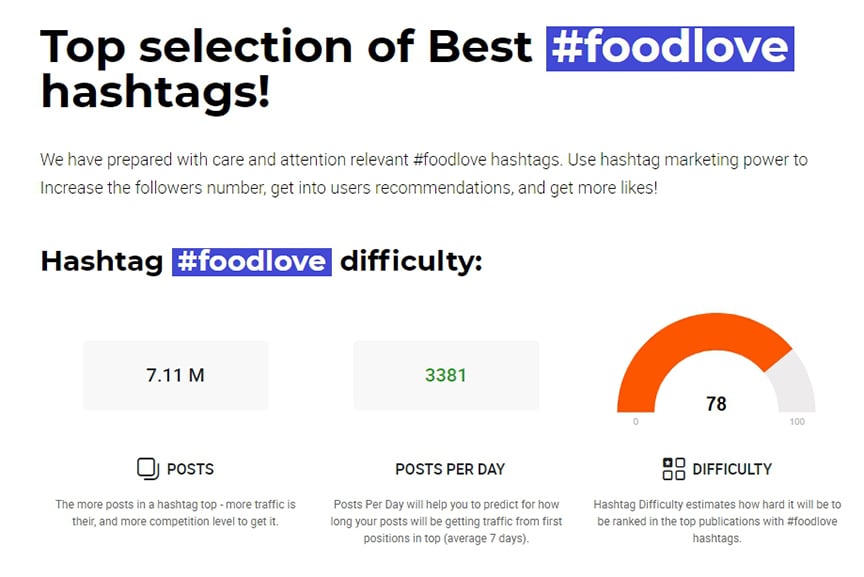 What happened after 3 months of using a hashtag generator?

The second goal - promotion is fulfilled. After all, promotion on Instagram is not a quick process. It is multifaceted and requires more time and effort. But, Jill has done the first steps in this field.

The third goal - increasing traffic was fulfilled. Using popular hashtags, she has boosted about 50% more traffic to the page.

The fourth goal - increasing the engagement rate was fulfilled. Using related hashtags under publications. The engagement has increased by 13%.

Now Jill is a successful food blogger, who in addition to promoting an Instagram blog, develops her website, which is becoming popular every day. It became possible thanks to hashtag generator that has selected the working hashtags.

New Inflact Tool helps you to find only trending hashtags!
Use Hashtag Generator and write only catching hashtags!
At your disposal, similar and related hashtags!
Choose the appropriate ones and become famous!

Pick up the best hashtags in seconds

For my favorite Instagram lovers, I’ve prepared a useful guide for trending hashtags to be used under your delicious food posts.

#recipe. Today, the number of culinary blogs on Instagram has more than a thousand. Above all, it's not just ordinary blogs - it's quite popular blogs, which have more than 10 thousand followers. These followers not only actively like and comment on publications but also use recipes.

#healthy. If you think that the trend for healthy food hashtags in 2022 is not relevant, then you are wrong! Healthy eating fever has taken over the world and is not going to give way to new trends. By adding this hashtag, you can attract a broad audience to your Instagram profile.
#yummy. To write that the dish is tasty and delicious no longer in trend. Anyway, people do not say so. Users much more like the word “yummy” for this. It is small, cute and can express the full range of pleasant sensations from the taste of a particular dish.

#instafood. This hashtag unites both the platform and the main subject of the post. Using it, you kill two birds with one stone. Take a closer look at it if you haven't used it yet.

Take the time not only to create cool and fresh content but also to promote it properly! Pick only trending food hashtags and gain millions of likes and tons of comments!

There are no comments yet. Be first.
Back to Blog
|
Main page
Direct demo Messenger
Manage all chats in one window.
Try demo chat
Table of contents
Use Food Hashtags Instagram And Boost 50% MoreTraffic To Your Blog!Hashstory: Specified the goals and strategyHashstory: ImplementationHashstory: Successful results!Get a bonus!
Link copied to clipboard
Tags:
5-minute improvements 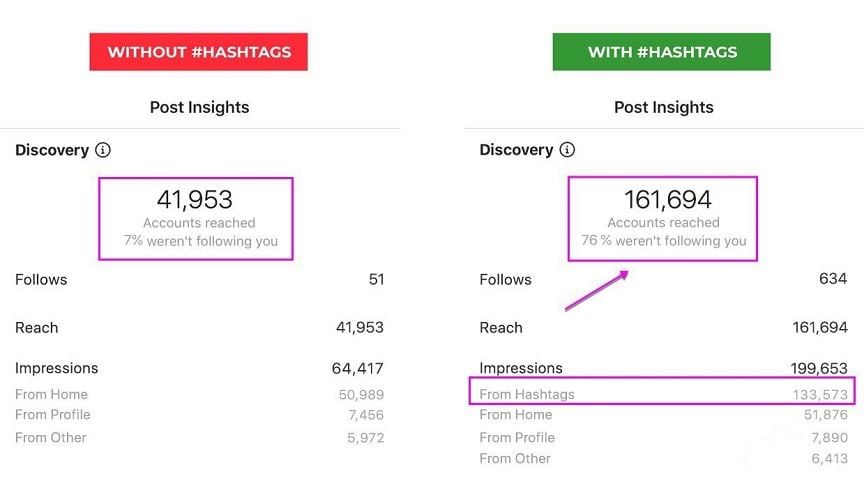 Trusted
We are already trusted by more than 15 000 clients. Check our social networks to see the feedback from them!
FINALLY INTERESTED? Start NOW
Cookies help us deliver our Services. By using our Services or clicking I agree, you agree to our use of cookies. Learn more
I agree
Welcome back!
Use your credentials to Sign In
or connect with